The Pomeranian Dog originated in Pomerania, which is now the area known as Poland and Germany.  The Pomeranian was developed from the ancient Spitz breeds.  This breed was originally a larger dog, weighing in at 30 pounds.  They were used as sheep herders.  Queen Victoria began breeding these dogs, and she started breeding them down in size.  Pomeranians were recognized by the Kennel Club in England in 1870 and were recognized by the American Kennel Club in 1888.  Boo is the first of this breed to have millions of fans and his own Facebook site.  His rise to fame began with a haircut due to extreme knotting in his hair and caused him to become an overnight sensation. 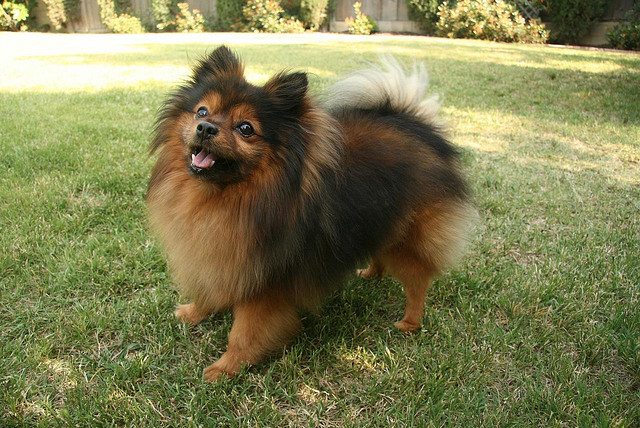 The Pomeranian is a toy-sized dog.  The head is wedge-shaped and the short muzzle is straight and fine.  Almond-shaped eyes are dark and medium sized.  The ears are small and erect and set high on the head.  The tail is feathered and lies straight and flat over the back.  Poms have a thick double coat.  The outer coat is straight, long and harsh in texture, while the undercoat is soft and thick.  The coat is usually longer around the chest and neck.  A variety of coat colors and patterns include:  red, orange, white, cream, blue, brown, black, sable, black-and-tan, or part-color, which is white with colored markings.  Poms weigh between 3 and 7 pounds and are 3 to 12 inches in height.  Their lifespan is approximately 15 years.

The ideal companion for a Pom would be singles, seniors, apartment dwellers, and couch potatoes.  This breed is proud and lively.  They are docile in temperament and are intelligent and eager to learn.  Poms are one of the most independent of the toy breeds.  They do best with consistent training and positive reinforcement.  If properly introduced to other breeds, they can get along well.  Poms love to bark and bark, and must be taught early to bark a couple of times and then quiet down.  They have the “Napoleon Complex” of most small breeds, and should be kept on a leash, as they do not realize how small they are!  This breed will take over the household, so developing a mutual respect is a must.  The “Small Dog Syndrome” can cause varying degrees of behavior problems such as separation anxiety, willfulness, nervousness, temperamental, lack of hesitation in attacking much larger dogs.  Because a Pom’s cuteness often causes a lack of training, this breed is not always recommended for children.  Pomeranians are good for apartment living.  They are very active indoors and will be fine without a yard.  Extra care must be taken that they do not overheat in hot weather.

Pomeranians should be brushed regularly to prevent tangling.  Ears and eyes should be cleaned daily and dental checkups are necessary.  Although Poms shed constantly, daily brushing from will help control this situation.