ATLANTA (June 24, 2015) — LifeLine Animal Project, the non-profit organization that manages both DeKalb and Fulton County Animal Services shelters, is asking all Atlantans to join its historic effort to make Atlanta a no-kill community for DeKalb and Fulton shelter pets by the end of 2016. Under LifeLine’s leadership, both shelters are within a few percentage points of the no-kill threshold, defined as saving 90% or more of the animals entering the shelters. The “I’m In” campaign, which features local spokespeople declaring their support for a no-kill Atlanta, kicks off on July 1, 2015, and campaign ads are featured on the sides of MARTA buses throughout Atlanta.

LifeLine will be asking people to change their social media profile pictures to the “I’m In” logo in a show of support on July 1, 2015. People can also join the campaign by visiting LifeLineAnimal.org to take the “I’m In” pledge and by uploading a picture or video of their pet to Facebook, Twitter or Instagram with the hashtag #In4LifeLine.

According to LifeLine Animal Project CEO Rebecca Guinn, the organization is seeking city-wide support for the no-kill vision. “To create a no-kill community in Atlanta, we need the community,” she says. “Spaying or neutering your pet, adopting rather than purchasing pets, licensing your pet, volunteering at one of our shelters or donating funds — every action can help ensure the success of a no-kill Atlanta by the end of 2016.”

One of the campaign spokespersons, “Walking Dead” actress Kylie Szymanski, is an avid pet lover who is thrilled to be involved in this effort. “Wouldn’t it be wonderful to be able to say that you live in a city that doesn’t euthanize healthy shelter animals?” asks Kylie. “I’m really proud to be part of such a progressive project.”

In 2014, LifeLine cared for 15,559 homeless animals and has dramatically increased adoption rates by 98 percent since commencing management of the county shelters.

To learn more about the “I’m In” campaign and how you can get involved, please visit LifeLineAnimal.org.

Founded in 2002, LifeLine Animal Project is the leading nonprofit organization providing lifesaving solutions to end the killing of healthy and treatable animals in county shelters, promote animal welfare and prevent pet overpopulation in metro Atlanta. As the managing organization for DeKalb County Animal Services and Fulton County Animal Services, LifeLine has dramatically increased adoption rates and decreased euthanasia rates by more than half at both shelters. The organization also operates two low-cost spay/neuter clinics, which have performed over 85,000 surgeries to date, and its own rehabilitative, no-kill shelter. Other outreach efforts include its Catlanta trap-neuter-return program, the first and largest in metro Atlanta, for stray and feral cats. For more information, please visit LifeLineAnimal.org. 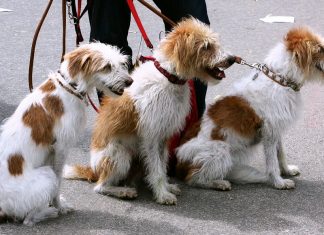 7 Questions You Need to Ask All Professional Dog Walkers Before...

Staff
As a pet parent, it’s your responsibility to ensure your dog gets its daily dose of outdoor exercise. Even if you don’t have time...

Dog Dental Care – How Often Should You Brush Your Dog’s...

Staff Writer
Although fresh breath and pearly whites are a benefit of brushing your dog’s teeth, doing so is actually a vital part of ensuring your...