This is a controversial topic among dog owners. Some believe that dog poop is harmless and fertilizes the environment; others argue that not cleaning it up is rude and potentially harmful to the water supply. The short answer among experts is yes, you need to pick it up. Here are five reasons why:

There’s nothing worse than seeing your neighbor’s dog take a big dump on your freshly mowed lawn while your neighbor “pretends” he doesn’t see. You can spot the pretenders from a mile away; while their dog starts sniffing around, they immediately gaze at the clouds or whip out their phones. You’ve worked hard to maintain your lawn, and there’s nothing more unsightly than a big turd festering between your potted plants and mailbox. If you’re caught “pretending” not to be notice, it can be extremely embarrassing. So just grab a bag, scoop it up, and drop it off at the nearest trash can.

Stepping on dog poop is a major aggravation, especially if you track it inside onto the carpet. Then you have to clean your shoes and the floor. This isn’t just an issue in neighborhoods; local parks have the same problem. Picnickers who spread out blankets are often disgusted to find that their picnic blanket or basket are now covered in feces. Children who roll down hills can wind up tracking it inside as well. Avoid this mess by cleaning up after your dog.

Dogs are notorious for eating anything and everything, and this applies to poop as well. Many times we’ve looked down at the ground to see our dogs enthusiastically munching on another dog’s fecal matter. This can spread diseases among dogs, as their intestines can carry a host of harmful viruses, parasites, and bacteria. There’s also nothing worse than receiving a big sloppy kiss from Fido after he’s gobbled down a few turds from the sidewalk. It’s pretty disgusting. 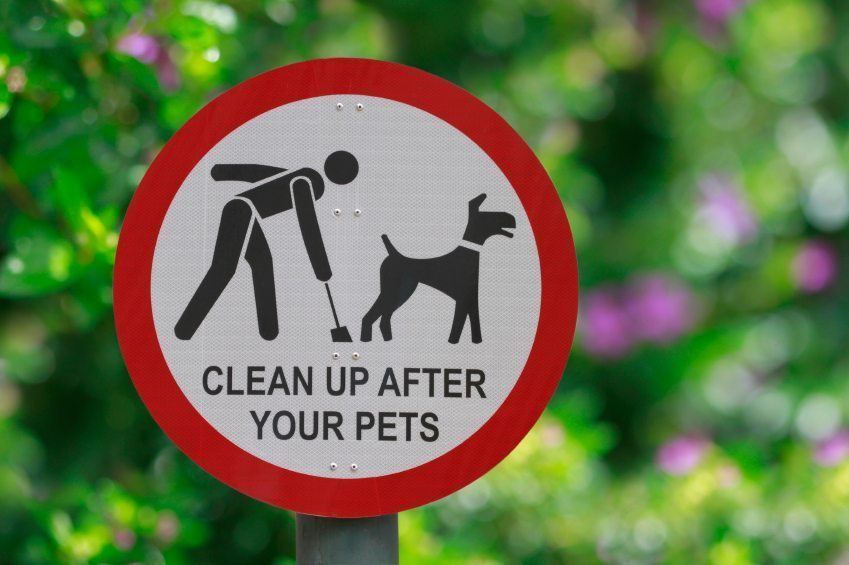 Dog poop is the third leading cause of water pollution in the United States. Our wastewater treatment facilities simply aren’t built to handle it. One gram of dog feces has over 23 million fecal bacteria, some of which can make humans very sick. These include tapeworms, E.coli, and salmonella. The EPA considers dog poop very toxic to the environment, in the same category as oil and chemical spills. If you think you’re doing the environment a favor by “fertilizing” the lawn, consider using a compost pile instead. Compost doesn’t contain the same nasty bacteria and viruses that dog poop does.

People go outside to smell roses, freshly cut grass, and the clean fall air. Catching a whiff of dog poop can really ruin the mood. Ensure that the environment is nice and clean by picking up after your dog. You’ve enjoyed nature at the local park; don’t spoil it for someone else.