Over the past few months, I’ve noticed an increased number of posts on our community forum about coyote sightings around our neighborhood in Smyrna, GA. With the increase in sightings also comes the increase in concern and fear for our safety and that of our pets.

I’ve been walking my two dogs in the same neighborhood for 17 years at various times of day and night. But I’ve only had one coyote sighting, which happened about three years ago. It was at night, and as I turned the street corner there stood a coyote on the edge of the woods near a street light about 50 yards away. He glanced my way, but before my dogs even noticed the creature, he had quietly stepped back into the woods and was gone.

With all the frequent sightings, I wondered if I should be a little more cautious.

After a quick Google search, I discovered that coyote sightings are becoming more and more common, and it’s not unusual for coyotes to be spotted in big cities like New York and Los Angeles. Unlike the red wolf, which has mostly disappeared due to human expansion, the coyote population appears to be healthy and evenly dispersed across the U.S.

One of the leading resources on coyotes is the Urban Coyote Research Program out of Illinois. They did an in-depth study of coyote attacks on humans between 1985 and 2006 and found there were a total of a 142 attacks throughout the U.S and Canada during that period. If you do the math, that breaks down to about 7 attacks per year. The study noted that most of these attacks took place in the western part of the U.S. – California and Arizona making up the largest percent.   (This doesn’t even come close to the number of average dog bites per year – according to the CDC, an estimated 4.5 million people are bitten by dogs every year in the U.S.)

The study also showed data on coyote attacks of dogs and cats, however it was just for the Chicago area. Unsurprisingly, small dogs were attacked more often than mid to large sized dogs. It was interesting to note that large dogs, like Labrador and Golden Retrievers had been attacked too – but it was always by two or more coyotes during those attacks.

How To Avoid A Coyote Attack

The Urban Coyote Research Program and other wildlife specialists agree on the following ways to best avoid coyote attacks:

The GA Department of Natural Resources lists hundreds of certified wildlife nuisance removal services within the state. However, wildlife relocators admit that removal of a coyote from an area is only a temporary fix and that eventually other coyotes will move in. Although coyotes have a varied diet and are opportunistic scavengers, they like to feed on rodents which helps descrease the spread of rodent born diseases. With the removal of a coyote you could possibly see an increase in the area’s rodent population. Not only do they serve as population control for rodents and but they also keep the ecosystem in check by controlling deer, geese and feral pig populations.

This may provide little comfort to someone who has lost a pet to a coyote but scientists have done studies that show that, “coyotes, and other large carnivores play a vital ecological role and their removal can have a devastating impact on species diversity and the health and integrity of native ecosystems.”

Wild birds benefit from coyotes. Without coyotes, song bird habitats would be at risk. Animals such as skunks, raccoons and feral cats raid nests which can severely impact bird habitats. Thanks to the coyotes, they keep these animal populations in check.

Coyotes are most active at night but it’s not uncommon for them to be seen during early morning hours. Contrary to popular belief, coyotes can be active during the day too. Just because you see a coyote in the daytime, does not mean it is rabid or sick.

Being Proactive and Creative

Some suggest taking a big stick or mace / spray on your dog walks. But if you want to take additional proactive steps to protect you and your beloved pets there are a couple of clever ideas that you could try.

After losing their dog to a coyote, Paul and Pam Mott designed the coyote vest for dogs. This armored vest comes with spikes and additional protective accessories. This creative idea helps small dogs from being bitten or attacked by coyotes and larger dogs. 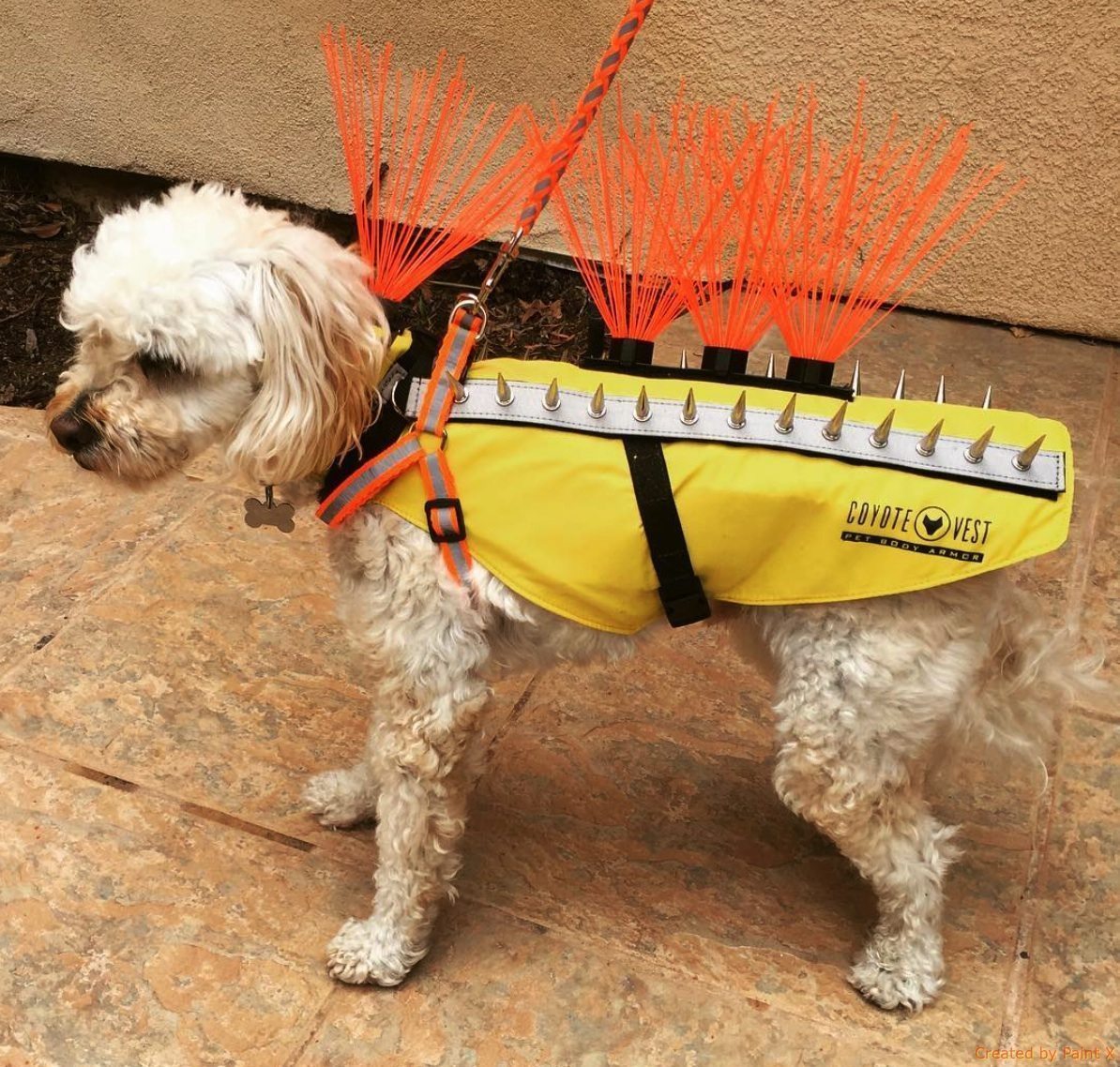 This is another humane method of deterring coyotes from leaping over a fence and into your yard. As it sounds, it’s a roller bar that is placed on the top of your fence. When the coyote jumps fence, the front paws grip the top of a fence, pulling their hind legs up to the top of the fence. The roller makes it so the coyote’s front paws roll off. Causing the coyote to bump head first into the fence. Make sure to look at fence requirements.

Although extremely rare, the threat of a coyote attack is real. Even with both of these products you are not guaranteed 100% safety from coyotes. However, you are more likely to encounter a stray or loose dog than a coyote during your afternoon walks – which I’ve had my fair share of. I’ll keep a vigilant eye out for coyotes but I’m confident that sightings will be rare.